The ChromeOS Firmware Utility Script simplifies the most common functions most users need when interacting with the firmware on their ChromeOS device. It can be run from ChromeOS, or any Linux which has a full Bash shell (so LibreELEC users need to boot a Ubuntu Live USB (eg) and run it from there). Currently, it allows the user to:

At startup, the Firmware Utility Script will automatically detect the device, OS, and current firmware type, and restrict the available menu options based on this information. An override is available for users who really know what they are doing (or really want to try and brick their device - though the script will do its best to try and prevent you from doing this). Because these operations are mostly being done to normally read-only parts of the firmware, the firmware write protect will need to be removed for most of the script's functions. This is documented for each function below, and the script will likewise check the write-protect state for each function that requires it to be disabled.

To download and run this script, from a terminal/shell type:
cd; curl -LO https://mrchromebox.tech/firmware-util.sh && sudo bash firmware-util.sh
and press enter. (copy/paste to avoid typos - the 2nd curl parameter is a capital O, not a zero)

NOTE: Under ChromeOS, this script must be run from a crosh shell (CTRL+ALT+T, 'shell', enter) or VT2 (CTRL+ALT+F2, login 'chronos'); it cannot be run from a crostini (penguin) terminal as that is a virtualized container and lacks the necessary access to read or modify the firmware. 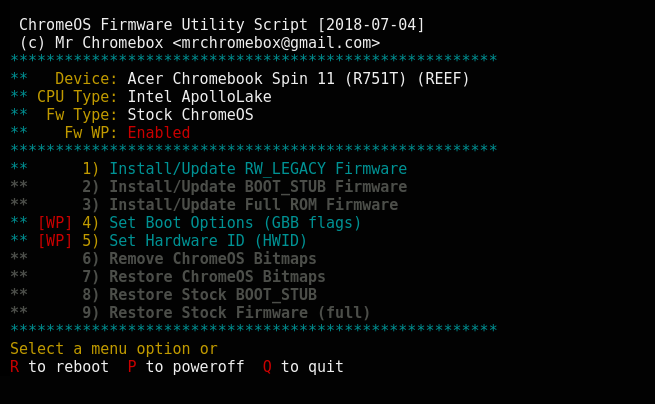 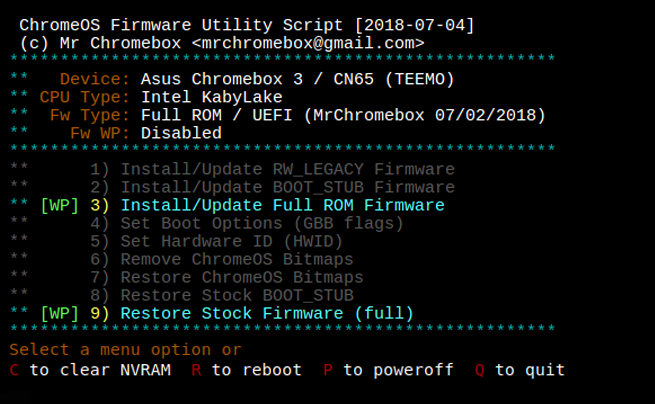 In both screenshots above, only the script functions available for the device and current firmware are enabled (cyan text); unavailable functions are in grey. Features which require the firmware WP to be disabled are clearly labeled as such, along with the ability of that function to be used based on the current WP state.


The Reboot and Power Off options are (hopefully) sufficiently self-explanitory :)

If running UEFI Full ROM firmware, there will be an additional option to clear the NVRAM. This will delete all bootorder entries stored in NVRAM, and they will be created again on the next boot (or next time grub is updated).


The source for the Firmware Utility Script (as well as all helper/accessory scripts) can be found on my 'scripts' github repository. Any issues, feature requests, and/or improvements can be reported via the issue tracker or a pull request.